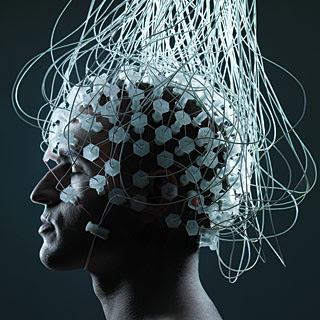 Recently Thomas Crampton wrote on Twitter that he was giving his interns at Ogilvy a Twitter test. He received some interesting comments, most negative, but mine was in the affirmative and I would like to explain why using more than 140 characters.
I had been thinking for sometime what this hyper abbreviated world we live in has done to our mental capacity. Are we dumber, as some think, because of our short attention spans or are we becoming super speed human computers? This is worth a brief moment to explore.

Our not too distant past:

Not so long ago we received our information in regularly scheduled, carefully packaged, and formatted requiring no action or response. The average person may have read the morning paper, listened to a bit of radio and tuned into the 6 o'clock news. It didn't matter what channel -- it was all the same news. During the day there were few interruptions because of no mobiles, email, faxes, msn, social sites or other such distractions. A nice leisurely pace to quietly digest a bland diet of well processed news and information. It is not a stretch to think that you would require a long attention span just to keep from going CRAZY! Imagine having no stimulus coming in between the morning paper and the evening news.

The average person probably now processes more information in an hour than a person just a short time back did in a week? year? lifetime? Using myself as an example, I receive several hundred emails every day, maintain several msn conversations, read 30 news feed, manage a team of 11 people, check out what my colleagues are doing on Linkedin twice per day, comment and giggle at new posts on Facebook at least 3 times a day, spend more than one hour a day researching online for business and a bit more for fun stuff to do after and watch a stream of twitter messages. This is only a portion of what passes my, or your, eyes and ears on any given day. It starts to become more clear that the appearance of a short attention span is, in fact, really a finely tuned brain that is able to process volumes of data, sift at lightening speed, and make quick and concise decisions with out missing a keystroke.

So how does this pertain to a Twitter test?

I could summarise most of my high school and university education in one concise Tweet. What I quickly learned in high school and University was that there were always enough, if not too many, facts around. Research was the easy part so keeping stuff in your brain did not make a lot of sense. It was always just a short reach away. What was valuable was being able to organise and communicate these facts.

Wow. I find some of this analysis to be absolutely frightening (to say nothing of the cyborg image) and it is in stark contrast to the conclusions I've drawn about about Twitter and the information age in general.

I'm not convinced that we are making better decisions today even if we are making them more quickly an more often. And I'm also not convinced that the decisions we are making pertain to the most relevant things (in terms of a better standard of life). Even you seem to allude to information overload. Some people would prefer to watch 10 channels at once while tweeting and talking on their headsets -- while others would prefer sitting on the beach of a calm lake while discussing and contemplating the wonders of life. Why the former would be considered more evolved or intellectual is beyond me.

I can not believe n. zero's post. which person would you want running your business or protecting your life.
(1)the person who has the ability to consume several facts at once and make fast decisions and can tell every one to bend over and grab your butt, because the plane is 10 seconds from crashing.
(2)the person who is saying duu, I wonder if I should tell the passengers they might be dead in 10 seconds. WHO WOULD U CHOOSE ?
LARRY

I can not believe n. zero's post. which person would you want running your business or protecting your life.
(1)the person who has the ability to consume several facts at once and make fast decisions and can tell every one to bend over and grab your butt, because the plane is 10 seconds from crashing.
(2)the person who is saying duu, I wonder if I should tell the passengers they might be dead in 10 seconds. WHO WOULD U CHOOSE ?
LARRYe